Have you ever wanted to implement an extra layer of security on your device without having to set anything up on your end.

This project goal is to do just that. The program is a python program that will scrap for security companies that post IP addresses that are known to distribute malware or are malicious and using UFW will automatically add them to your block list. I would make the program run at least once a week and update its list of known IPs.

This project first started as little script that I used to help myself learn python. I wanted it to continue to grow as I expanded my knowledge, but I lost sight of my goal. The whole idea is to try and make security easier. The project enables Unix devices to add an extra layer of security to their devices that will be continually updated every week. To fully understand security concepts can be quick hard this allows the user to just run the applications and do the rest for the user.

Innovation Claim:
This project is innovative because it allows users using a computer to run a program that would look for known malicious IP addresses and block them using UFW. This would enable user on Linux devices for now to implement a firewall for an extra layer of security. While also allowing users to block specific IP addresses they want to block.

Check out my program on GitHub, download it, run it, and please give me feedback or suggestion you have! 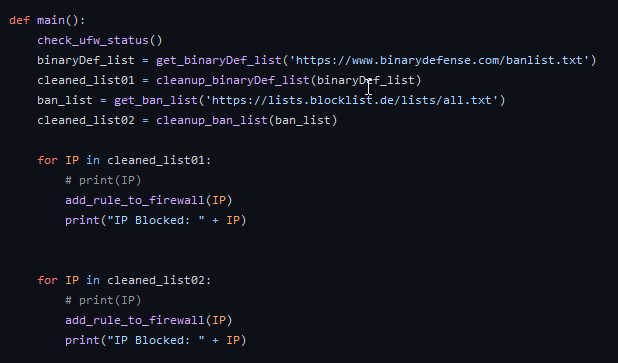